The Euro edges lower in early Monday’ following a triple-Doji last week that signaled strong indecision but the action is still moving above new 2022 low at 0.9900, posted on Aug 23.
The single currency came under pressure on Fed’s hawkish stance, confirmed by the statement of chief Powell in Jackson Hole last Friday, though expectations that the European Central Bank might be more hawkish than expected in their September’s policy meeting that partially offsets negative impact and so far keeps the single currency afloat and above 0.9900 support.
Daily studies are in full bearish configuration, with negative picture being boosted by eventual weekly close below parity level for the first time in two decades and the pair being on track for the third consecutive strong monthly fall.
However, investors still keep an optimism that the ECB would be more aggressive in September, as rising inflation threatens to further damage already fragile economic situation in the EU bloc and the central bank needs to intensify its fight to restore the price stability.
Oversold weekly studies add to hopes of rebound, which would remain in play while the price stays above 0.9900, with return above parity to add to initial positive signals, however, more work at the upside will be needed to sideline immediate downside risk and generate stronger bullish signals. 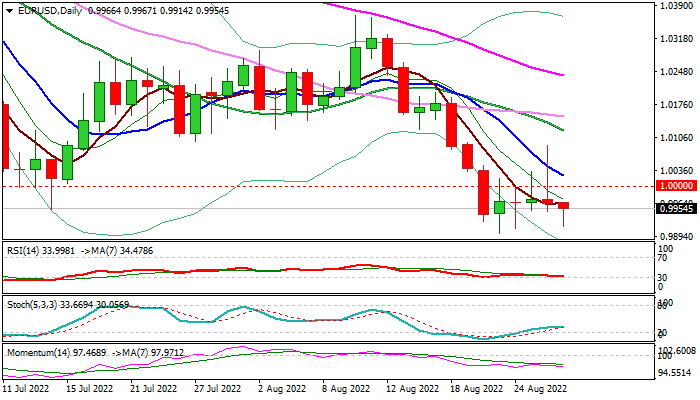