Oil is consolidating after Tuesday’s 3.3% drop

WTI oil is consolidating in early Wednesday after Tuesday’s sharp pullback from new highest level in almost seven years.
Oil price fell 3.3% on Tuesday, registering the biggest one-day drop since Apr 5, mainly hit by failure of OPEC+ group members to agree on extending existing production cuts to the end of next year, and starting to increase supply from August until December, as accelerating economic recovery boosted global demand.
Lack of agreement between top producers would keep oil prices elevated, although the market is already too tight for consumers, especially in the US, where oil is already uncomfortable for consumers and industry.
Technical studies show that larger uptrend remains intact and the pullback is seen as positioning for fresh push higher.
Tuesday’s pullback so far found solid ground at $73 zone (broken key Fibo level at $73.44 / rising 20 DMA at $72.92) with ability to hold above these supports to keep bulls intact.
On the other side, weekly indicators are turning south in overbought territory that warns of deeper pullback.
Loss of $73.00 zone would risk test of psychological $70 level and former top of Mar 8 at $67.95.
Key barriers lay at $74.50/$75.00 zone, with sustained break higher to sideline immediate downside risk. 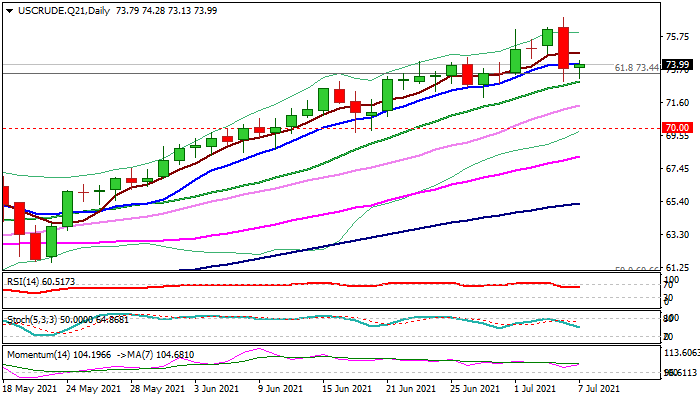