US CRUDE OIL – bulls are consolidating under fresh high at $56.67; US crude stocks report is in focus

WTI oil extends consolidation into the second day but holds high levels around $57.00 handle after hitting the high of over two years at $57.67 on Tuesday.
Stronger pullback cannot be ruled out as strongly overbought daily studies warn. Dip below $57.00 could stretch towards next solid support at $55.16 (rising 10SMA) which is expected to ideally contain.
Sentiment remains positive on expectations of output cut program extension and rising tensions in the Middle East, which so far offsets negative impact from Chinese crude imports which fell to the lowest level in a year.
Release of API crude stocks report on Wednesday slightly disappointed on 1.5 million barrels draw, which was well below forecasted 2.7 million draw.
Traders are eyeing today’s release of US EIA weekly crude stocks which are forecasted for 2.8 million barrels draw in the past week, which could further support oil price on results at/ above forecasted figure. 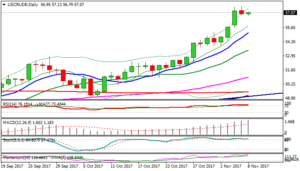