WTI oil hit new high at $62.19 on Thursday (the highest since mid-May 2015) in extension of Wednesday’s strong rally.
Oil prices remain supported by OPEC-led production cut, with additional boost coming from recent tensions in Iran, one of key world oil producers.
In addition, repeated draws in US oil stocks which brings inventories close to five-year average and freezing weather in the US and Canada which increased demand for oil products, keep oil prices supported.
US API crude inventories report was released on Wednesday, showing a draw of nearly five million barrels, with EIA report due later today, being in focus (5.14 million barrels draw f/c vs -4.60 million barrels previous week).
Oil price is holding with narrow range under new high on Thursday and looking for attack at key barrier at $62.71 (13 May 2015 high), break of which could spark fresh acceleration towards $66.72 (50% retracement of $107.40/$26.04 descend).
Technical studies are in firm bullish setup and supportive for further advance, however, corrective action could be anticipated, as overbought conditions on daily and weekly charts warn of correction. 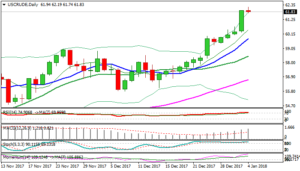