Cable is holding near new 31- month low at 1.2100, posted earlier today and awaiting news from BoE’s policy meeting today.
Recovery attempt on Thursday stalled at 1.2249 and pound fell quickly after Fed cut rates in expected action but signaled no further easing in coming months that lifted dollar and pushed sterling lower again.
Hawkish tone from Fed added to existing negative sentiment on fears of no-deal-Brexit that keeps pound firmly in red.
Temporary relief was provided by better than expected UK Manufacturing PMI (July 48 vs 47.7 f/c).
Markets are looking for impact on BoE’s decision, as the central bank is expected to stay on hold and against those who expect that the central bank is going to join prevailing trend and start easing in coming months.
On the other side, fears of Brexit without deal that could push Britain into recession and prompt central bank to cut rates, keep expectations for such scenario at high percentage.
Alternatively, divorce with transition deal would keep on the table probability of rate hike.
Under current circumstances, sterling is unlikely to find firm ground and start serious recovery, but rather to use upticks as fresh selling opportunities, as sentiment remains very negative and studies on daily /weekly charts in full bearish setup.
Clear break below 1.2100 handle would open way towards key supports at 1.2000 zone (post-Brexit vote low of 7 Oct 2016). 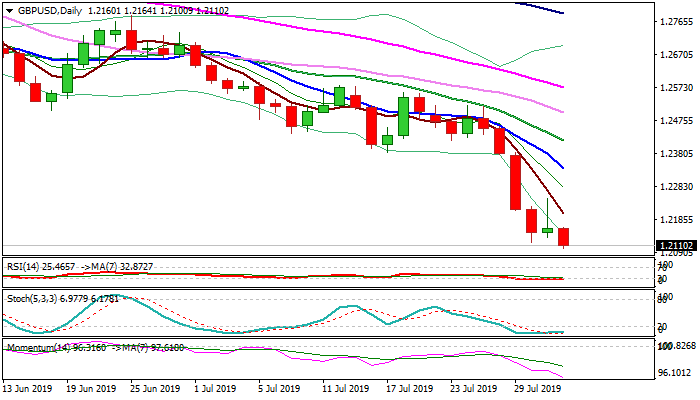