The Euro is holding in a tight range on Monday, following initial bullish signal on double downside rejection last Thu/Fri, on expected headwinds at key 1.0360/40 support zone.
Mixed daily studies (14-d momentum is attempting to break into positive zone and stochastic is heading north, RSI and MA’s are bearishly aligned) look for clearer signal.
Initial optimism that the action could bounce, exists but needs verification on lift and close above daily Tenkan-sen (1.0490) that is seen as minimum requirement.
In such scenario, recovery would accelerate towards strong barriers at 1.0572 (daily Kijun-sen), 1.0602 (daily cloud base) and 1.0614 (Jun 27 recovery top), but unlikely to easily break higher that would keep short-term action within the range and keep the downside vulnerable.
Expect stronger direction signals on break of either pivot at 1.0572 and 1.0340.
Fundamentals do not work in favor of Euro, as the ECB will likely stick to its initial decision for the first rate hike by 25 basis points, while the Fed is increasingly hawkish and markets already talk about more aggressive step on 75 basis points hike in July policy meeting that would further inflate the dollar and keep the single currency in defensive. 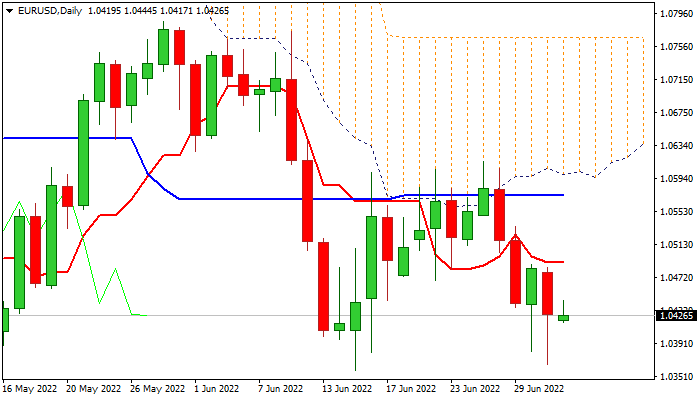