Euro pressures 2022 low, on track for the first close below parity in two decades

The Euro is establishing below parity level and is pressuring 2022 low at 0.9952, on track for the first daily close below 1 dollar since Nov 2002, following a false break in mid-July this year.
The sentiment remains increasingly negative, as recent economic data add to fears that the bloc’s economy is sliding into recession, while the dollar is well supported by growing expectations that Fed is going to maintain aggressive approach to its monetary policy tightening and safe haven buying.
Bears are unlikely to face stronger headwinds at 0.9952 pivot, but oversold studies warn of some price adjustment in coming sessions.
Technical studies are in full bearish setup on daily chart, adding to negative outlook, as the action is weighed by last week’s large bearish candle, which formed bearish engulfing pattern, increasing pressure.
Broken parity level reverted to initial resistance, followed by broken Fibo 76.4% (1.0050) and 1.01 zone (broken Fibo 61.8% / former trough of July 27) which should keep the upside protected. 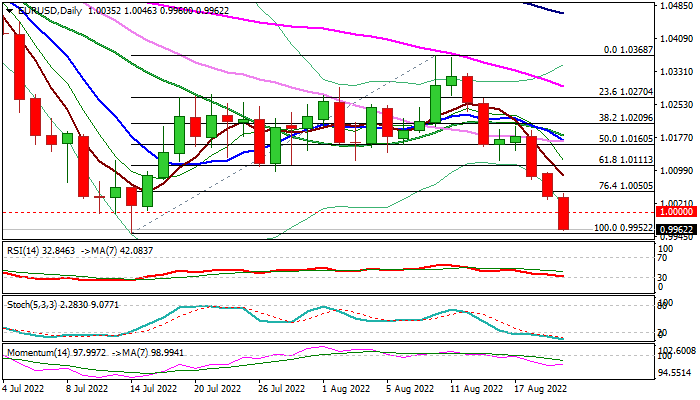