Cable dipped on Tuesday after strong three-day rally showed initial signs of stall ahead of important Fibo barrier at 1.3837 (61.8% of post-Brexit vote 1.5016/1.1930 fall).
Fresh easing was triggered by UK CPI data which ticked lower in December, pulling from previous month’s six-year high at 3.1%.
December inflation came in line with expectation (3.0%) and should not cause stronger negative impact which was expected on release below 3%.
However, overextended studies on daily chart point to corrective action, following recent steep ascend.
Daily RSI is emerging from o/b territory; slow stochastic is strongly overbought and turned sideways, while momentum is turning south.
Today’s close in red will be next bearish signal, with corrective easing to be ideally contained by rising 10SMA (currently at 1.3605), before broader bulls continue. 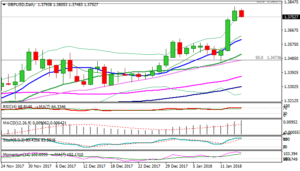