The WTI oil price regained traction and rose to one-week high in mid-Thursday’s trading, advancing over $1 following drop in Asia / early Europe.
Fresh strength signals that recovery from new nine-months low ($76.35) keeps traction after acceleration on Wednesday resulted in daily gains of nearly 5%, though it is still early to talk about stronger correction as oil price is under strong pressure from growing recession fears that could significantly hurt global demand and push the price further down, as the oil is in a steady downtrend since mid-June.
On the other side, fresh optimism comes from signals that the OPEC+ group is talking about stronger production cut that would be supportive for oil if the cartel, on its Oct 5 meeting decides to decide to cut production by 1 million bpd that was suggested by Russia.
Technical studies on daily chart are mixed, but positive signal is developing on weekly chart, as the contract is on track for the first bullish weekly close after four consecutive weeks in red and a bear-trap pattern is forming after strong rejection pivotal supports provided by Fibo 76.4% of $62.42/$130.48 / 100WMA).
Near-term action is expected to keep bullish bias on repeated close above daily Tenkan-sen ($81.44), but bulls will need a confirmation an extension through daily Kijun-sen ($86.94) that would open way for stronger correction. 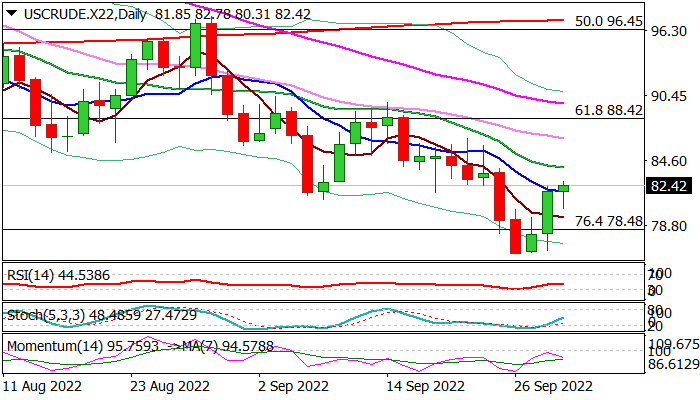