The Euro advances for the second consecutive day and cracks strong resistance provided by the base of thick daily cloud (1.0569) reinforced by converged daily Tenkan-sen / Kijun-sen.
Recovery was already rejected under the cloud base last week, as cloud heavily weighs on the single currency and adds to negative fundamentals.
Strong dollar’s safe-haven appeal and support from expectation that the Fed will remain aggressive in policy tightening, keeps the Euro in defensive.
I addition, the data released today, showed that EU’s current account  balance slipped into deficit for the first time since 2012 that would have a negative impact on Euro, which was supported by a big surplus during past years.
The action is expected to continue to face strong headwinds from thick cloud and repeated failure to clearly break into cloud would signal another recovery stall and keep the downside at risk.
Daily techs remain in bearish setup and add to negative outlook. 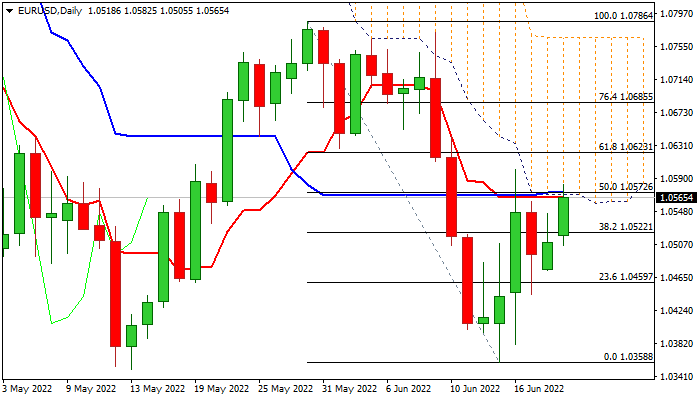 Cable stands at the front foot ahead of UK inflation report