Spot Gold price ticked higher on Wednesday but stay near two-month low at $1260, which was retested on Tuesday’s bearish acceleration.
The yellow metal maintains bearish sentiment on positive signals of overhaul of the US tax system which inflated the dollar.
Traders are also looking for economic indicators which are expected to give clearer signals about the trajectory of the US monetary policy in the short term.
Today’s focus turns towards US ADP jobs report which is usually seen as an indication for the key release, US Non-Farm payrolls data, due on Friday, which is the last report from labor sector ahead of FOMC policy meeting next week.
Technical outlook remains firmly negative as Tuesday’s dip marked full retracement of $1260/$1299 rally.
Daily indicators are holding in negative territory and converged 10/20/55SMA’s are turning south and forming double bear-cross, which would further weigh on near-term action.
Also, Tuesday’s close briefly below 200SMA was bearish signal, however, sustained break here and below key med-term support at $1260 (06 Oct low) is needed to generate stronger signal of bearish continuation.
Meanwhile, consolidative / corrective action could be expected before bears resume, with extended upticks expected to stay below converged MA’s at $1281. 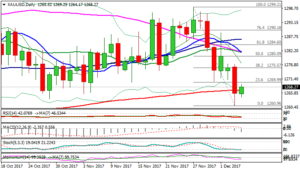