Spot Gold – correction after strong three-week rally could be expected

Spot Gold price eases on Wednesday, taking a breather after strong rally in past over three weeks hit new high at $1321 (the highest since mid-September).
Recent strong rally was supported by weak dollar which came under pressure on expectations for fresh tightening of monetary policy in major economic which would decrease divergence between the Fed and other major central banks.
Bullish acceleration through strong barriers at $1299 and $1306 (former tops of 27 Nov / 16 Oct) broke and closed above another pivotal barrier at $1311 (Fibo 61.8% of $1357/$1236 (Sep / Dec descend), generating fresh bullish signal for further advance.
However, bulls may pause after strong three-week rally as overbought daily studies warn of correction.
Stronger bearish signal could be expected from reversal of daily RSI and slow stochastic from overbought territory.
Broken Fibo 61.8 barrier at $1311 now acts as initial support where fresh easing found temporary footstep.
However, deeper pullback cannot be ruled out with loss of $1311 handle to expose next significant supports at $1300 (psychological support / Fibo 23.6% of $1236/$1321 rally) and $1291/88 (rising daily Tenkan-sen / Fibo 38.2%) where extended dips should be contained to keep overall bulls intact. 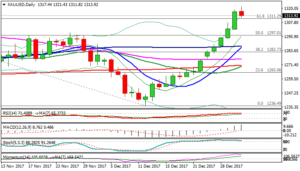