Spot Gold is trading in the fourth consecutive bullish week, in strong recovery rally from $1236 (10 Dec low).
A higher low of larger uptrend from is forming at $1122 (Dec 2012 low) is forming at $1326 after strong recovery rally retraced over 61.8% of $1357 (2017 high) / $1236 corrective bear-leg, signaling and end of correction and attack at key barriers at $1357 (08 Sep 2017) and $1375 (06/11 July 2016 highs).
Overall structure is bullish and supportive for further advance, however, consider corrective action before bulls resume as daily studies are overbought.
Dip-buying scenario remains favored as the yellow metal’s price remains supported despite comments from Fed about a faster pace of interest rate hikes in 2018, as other major central banks are signaling tighter policies which would reduce the divergence between the US and other world major central banks and keep the dollar under pressure.
Solid supports lay at $1300/$1290 zone (psychological support / former high of 27 Nov 2017, reinforced by rising daily 10SMA and weekly 20SMA), marks solid support where corrective dips should be ideally contained.
Bulls look for weekly close above cracked Fibo barrier at $1311 (Fibo 61.8% of $1357/$1236 descend) to generate strong bullish signal. 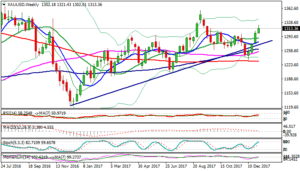