Cable accelerated lower in early Tuesday, extending Monday’s nearly 1% fall, with fresh weakness being sparked by remarks of BOE’s Governor Andrew Bailey.
Bailey said that escalating Covid-19 cases increase downside risks for the economy, pointing to ‘hard yards’ to come and that the BOE would do everything it could to support the economy.
He pointed to still strong housing market and Q3 recovery that was ahead of central bank’s expectations, but unemployment is higher than its reported number and labor demand remains weak, saying that UK economy can be viewed as glass half full or half empty.
UK PM Boris Johnson will announce government’s new measures later today and expected to tell people to work from home if they can, as well impose new restrictions on pubs, bars and restaurants, in attempts to tackle accelerating second wave of coronavirus outbreak, as Britain may face an exponentially growing death rate, unless urgent action was taken.
Cable fell to two-month low (1.2712) after Bailey’s comments and cracked strong supports at 1.2724/18, provided by converged 100/200DMA’s  and daily cloud base.
Weak sentiment keeps sterling under increased pressure, with bearish daily studies, adding to negative signals.
Bears need close below 200DMA / cloud base, to generate bearish signal, which would be boosted by extension below next pivotal support at 1.2690 (Fibo 38.2% of 1.1409/1.3482).
Falling daily Tenkan-sen tracks the action since rejection at 1.30 zone and offers solid barrier at 1.2873, which should limit upticks and keep bears fully in play. 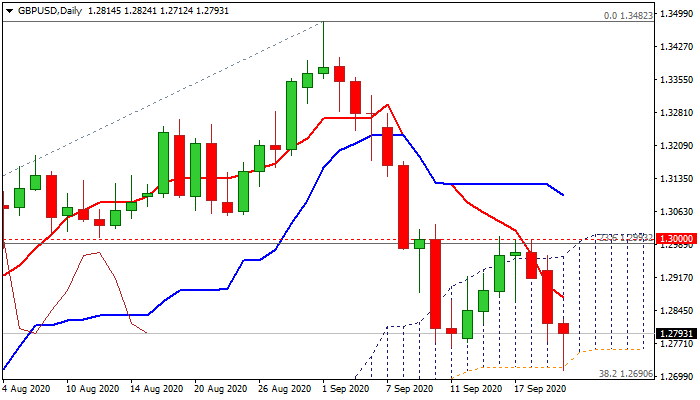 Breaking: BOE’s Bailey says UK economy can be viewed as glass half full or half empty, Sterling falls across the board