Cable remains at the back foot following Wednesday’s brief probe below 2020 low (1.1410) that posted new lowest since 1985.
Subsequent bounce left Hammer candlestick, generally bullish signal, which so far did not provide any positive reaction, as the outlook for pound remains increasingly bearish.
Markets will closely watch the first steps of new UK Prime Minister Liz Truss, who said that the government will set out a bold plan of action to support households and businesses and also to boost domestic energy supply, including both, short and long-term solutions, though she did not provide any detail about the plan.
BOE officials expect new plan to ease short-term inflationary pressure that would partially ease mounting worries as inflation already hit a double-digit levels and according to some forecast, may rise up to 20% if crisis with energy supplies deepens.
The policymakers, however, remain cautious, as some leaked details of the plan signal a massive government spending that would exceed pandemic furlough scheme that could fuel inflation.
Cable returned to red on Thursday, with near-term action so far holding within  a narrow range, formed after strong rejections on both sides on Tuesday and Wednesday.
Overall technical picture remains firmly bearish, with extended consolidation likely to precede fresh weakness.
Sustained break of 2020 low would generate strong signal of bearish continuation of larger downtrend from 2007, which was paused for consolidation since 2016 until now and unmask 1985 low at 1.0520.
Near-term action faces initial resistance at 1.1583 (falling 10DMA), ahead of more significant barrier at 1.1610 (consolidation range top / Fibo 23.6% of 1.2276/1.1405), which should ideally cap and keep bearish structure intact. 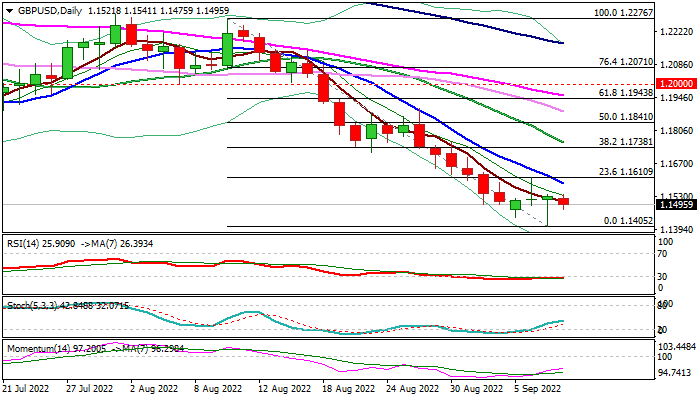 Deepening crisis prompts the EU to overhaul its fiscal rules