The Euro edges lower in early European trading on Thursday, following 1.02% bounce on Wednesday, as recovery is facing strong headwinds from parity area, now reverted to significant resistance.
Technical studies on daily chart have slightly improved after Wednesday’s rally closed above 10DMA (0.9974) and 14-d momentum accelerated higher from the deep negative zone, though overall structure remains firmly bearish on increasingly negative fundamentals, suggesting limited recovery before bears re-take control.
The ECB’s policy meeting is the key event today, with wide expectations that the central bank will go for a big size rate hike to fight soaring inflation, which is getting increasingly entrenched and strongly hurts households and economic activity.
Expectations about the size of rate hike are divided between 50 and 75 basis points, with some expecting even more aggressive decision, but more important will be a signal that the ECB will establish in the tightening track and continue to raise interest rates in the coming months.
The policymakers are aware of the negative effects of higher interest rates which would further undermine already fragile economic conditions, as the economy is likely to enter recession during the winter.
All these factors continue paint the outlook in the dark colors, with growing fears that the conditions may deteriorate and exceed the most pessimistic expectations.
Near-term action faces immediate support at 0.9974 (10DMA), with return and close below here to soften near-term tone and generate initial signal of recovery stall,.
This would bring in play scenario of retest of key support at 0.9864 (Sep 6 new 20-year low) loss of which would risk acceleration towards 0.9620/00 zone (lows of Sep/Aug 2002).
Conversely, sustained break above parity, would generate positive signal, which would look for a verification on clear break above 1.0055/79 (Fibo 38.2% of 1.0364/0.9864 bear-leg / Aug 31 lower top). 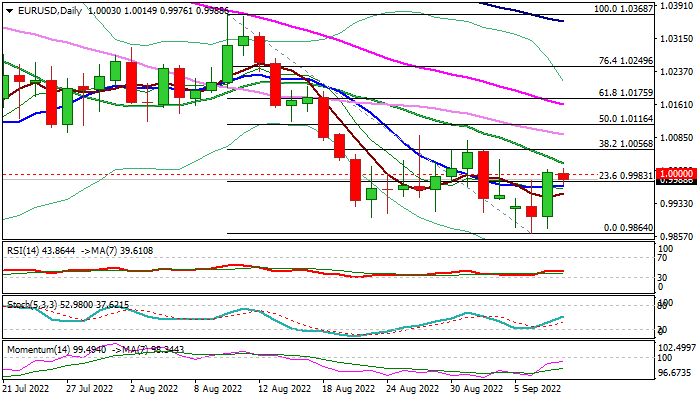