The WTI oil fell further on Wednesday, accelerating to new multi-month low (levels last seen a day before the war in Ukraine started) as sentiment was soured again on deteriorating fundamentals.
Oil prices came under fresh pressure on growing fears that looming recession would further hurt global demand that so far countered threats that Russia will completely stop oil and gas supplies after the European Union announced plan to impose cap on Russia’s energy resources.
The situation in the oil market remains turbulent, with oil supplies expected to be tighter towards the end of the year, with strong negative impact from the energy shortage during the winter, to mainly focus the Europe.
Adding to the key factors that drive oil prices was a  release of the US strategic reserves and continuous fall in US crude stocks, while the OPEC sticks to its existing policies and refusing to make a significant increase in oil production.
Near-term technical picture is showing rising bearish sentiment on daily chart, with formation 30/200DMA death-cross and 10/20DMA bear-cross, maintaining downside pressure.
Last week’s close below pivotal Fibo support at $88.42 (61.8% of $62.42/$130.48 rally) added to negative signals and opened way towards $80 (round-figure) and $78.48 (Fibo 76.4%).
Upticks should be capped under broken Fibo 61.8% level ($88.42) to keep bears intact. 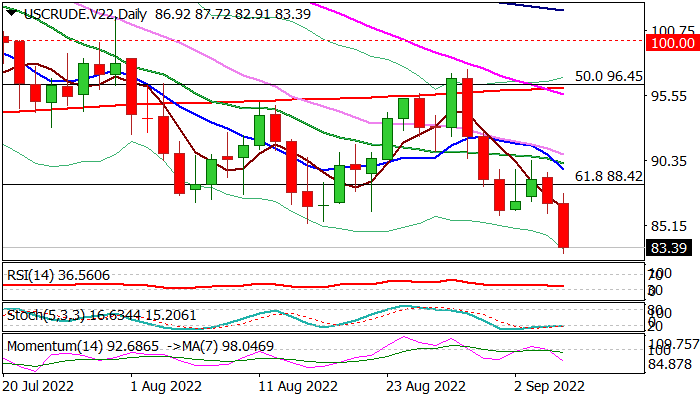