Cable ticked to new nine-month high at 1.3228 in Asia on Thursday in extension of post-Fed rally but eased back to 1.3200 zone in early European trading.
The pair remains biased higher on positive sentiment over UK election as Conservative Party is expected to win majority.
The pound will be the first to react on election results and two scenarios are in play.
Tory’s victory with comfortable is expected to be bullish signal but reaction might not be as strong as many anticipate.
The pound rallied nearly 10% against dollar and Euro in past four months, driven by rising optimism for final end of Brexit story and traders may book profits to avoid risk, that bring in play ‘buy the rumors-sell the facts’ scenario.
Also, technical studies on larger timeframes are overbought and massive monthly cloud weighs heavily (cloud base lays at 1.3337), adding to the possibilities of limited advance, however, extension through monthly cloud base and 2018 high at 1.3382 would allow for stronger rally and expose 1.40 zone.
On the other side, sterling might be hurt if leading party fails to get comfortable majority that would lead towards hung parliament.
And finally, shock on Labour’s victory would push the pound significantly lower and risk losses of several big figures.
Polls will close at 22:00 UK time and first results can be expected in the following hours, when initial market reaction can be anticipated. 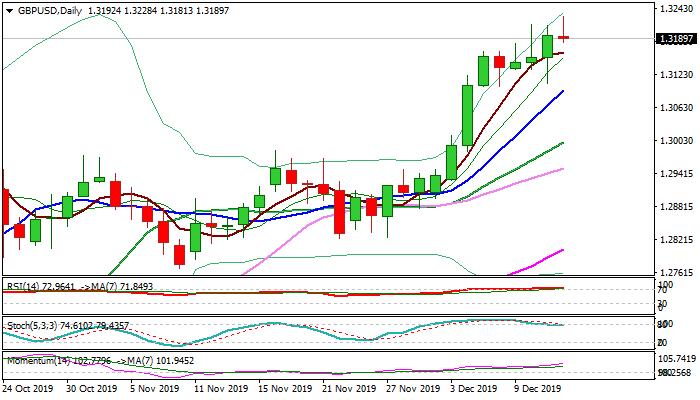