The Euro remains at the back foot on Thursday, holding in red for the fourth straight day, after Wednesday’s action was rejected above pivotal Fibo support at 1.1714 (61.8% of 1.1612/1.1880) and subsequent bounce and narrow consolidation were short-lived.
The single currency came under pressure on fresh wave of risk aversion amid surge in new Covid-19 cases and fresh restrictive measures across the Europe, as well as growing uncertainty ahead of US election day.
Daily techs in bearish setup support scenario, as negative momentum continues to rise and daily cloud twist next week, continues to attract.
Last week’s bull-trap above 1.1858 Fibo barrier sparked fresh acceleration lower.
Extended near-term bears ears probe again through cracked trendline support (bull trendline connecting 1.1612/1.1703 low) today, pressuring 1.1714 pivot, break of which would confirm reversal and open way for further weakness.
The Euro did not react to data released earlier which showed unemployment in Germany fell more than expected, signaling steady recovery in the sector, as all eyes turn on today’s ECB policy meeting.
The European central bank’s policy is likely to stay unchanged today, but with strong expectations that the ECB will pave way for further easing in December.
The EU economy is hit by the second wave of coronavirus, with sharp rise in new cases, prompting bloc’s member countries to impose new, more restrictive measures, which could further undermine fragile economic recovery.
Dovish stance from the ECB would further pressure euro and risk extension towards the floor of multi-month range at 1.1612.
A number of resistances lay above and expected to limit corrective upticks, with near-term action to remain biased lower while holding below 1.1800 pivotal resistance zone. 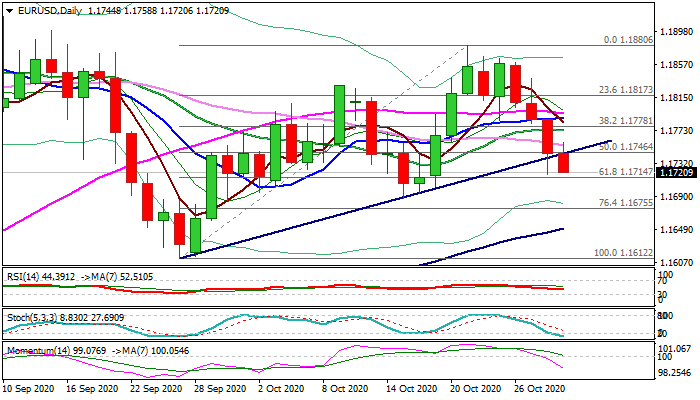