Cable is standing at the front foot on Tuesday, following strong downside rejection previous day and inflated by fresh risk sentiment that weakened dollar.
Larger uptrend remains intact despite double failure at 1.3700 zone, as subsequent dips stay above rising 20DMA for the third consecutive day, with initial signal of bear-trap under 20DMA (currently at 1.3564).
Daily studies are in mixed mode as bullish momentum continues to fade and stochastic is descending but Tenkan-sen and Kijun-sen lines are in bullish setup and rising cloud continues to underpin the action.
UK inflation figures for December are due early Wednesday and will be closely watched, as traders focus on their impact on BoE interest rate expectations.
Annualized CPI is forecast to rise to 0.5% in December from 0.3% previous month, with stronger than expected rise to boost hawks, after BoE Governor Andrew Bailey talked down prospect for sub-zero rates last week that lifted pound to multi-month high against the US dollar.
Majority of economists polled see cut of borrowing costs into negative territory as unlikely or very unlikely.
Rising 20DMA, above which the price action stays since Dec 15, marks pivotal support and near-term bias is expected to remain with bulls while the price holds above.
Conversely, loss of 20DMA would soften near-term structure and risk deeper pullback. 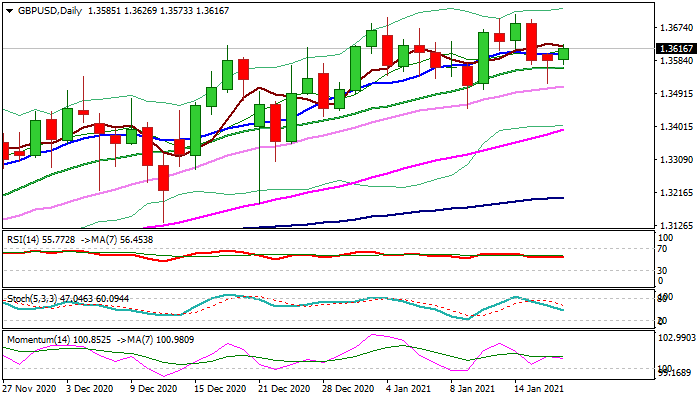