WTI is holding in red at the beginning of the week, after hitting fresh high at $59.02 (the highest since late June 2015) last Friday.
Oil price maintained strong bullish sentiment in past couple of weeks on strong signals of oil market rebalancing and hopes that OPEC-led output cut agreement will extend.
Traders booked some profits from last week’s strong rally, as overbought daily studies suggest corrective easing before oil price resumes towards psychological $60 barrier which also marks initial target.
Meeting of oil ministers of OPEC and other big oil producers on 30 Nov in Vienna is in focus this week, as markets expect major oil producers to extend their current production cut program beyond its expiration in march 2018.
Meanwhile, oil price may extend corrective easing towards initial support at $57.90 (former top of 08 Nov), with extended dips to be contained by rising 10SMA (currently at $56.97). 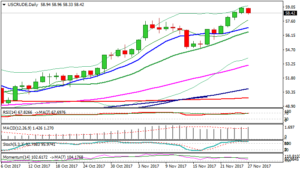