The US dollar moved higher across the board after of US data on Friday showed mixed results. Key event was release of US Q4 GDP which fell below expectations, showing US economic growth slowed in the fourth quarter.
GDP increased 2.6% at annual rate, falling below the forecast for 3% growth and Q3 numbers were revised lower to 2.6% from 3.2% initially.
On the other side, upbeat Dec US Durable Goods Orders improved negative tone from GDP miss (2.9% in Dec vs 0.8% f/c and upward revised Nov figure from 1.3% to 1.7%).
The dollar was also affected by contradictory comments from top US officials in economic forum in Davos this week, as US Treasury Secretary Mnuchin favored weaker dollar as better for the US economy, while US President Trump opposed the statement, preferring stronger US currency, which confused markets and resulted in in increased volatility in the markets on Thursday and Friday.
The USDJPY pair stays in the downtrend which accelerated in past three weeks and showing signs of continuation, lacking the catalyst for stronger recovery, as Thursday’s unexpected shift from Donald Trump seems to be insufficient to spark stronger recovery, despite extended studies which also warn of correction.
Friday’s close in red would neutralize existing hopes for stronger recovery action (upside attempts were limited at 109.75 on Thu/Fri), with additional negative signal coming from long red weekly candle (the pair is on track for the third consecutive bearish weekly close).
Bears need confirmation on firm break and close below 109.10 (base of thick weekly Ichimoku cloud, which was dented on Thursday’s spike to 108.50) to open way for retest of 108.50 and extension towards key m/t support at 107.31 (08 Sep low).
To neutralize persisting bearish threats, close above falling 10SMA (110.29) is required. 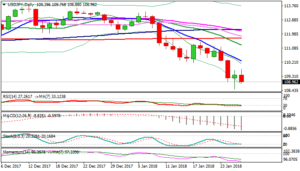