WTI oil price hit new over three-year high at $66.42 on Thursday, in extension of three-day rally which accelerated on Wednesday.
Fresh boost to oil price came from another decline in weekly crude inventories as EIA report on Wednesday showed draw of 1.1 million barrels, neutralizing fears after API report on Tuesday showed the first build of crude stocks in ten weeks.
Oil price remains well supported by production cut from main world oil producers, which started last year and is set to last until the end of 2018.
Rally on Wednesday completed shallow correction from $64.87 to $62.80 and extension higher signaled a continuation of broader recovery rally which eyes next target at $66.75 (50% retracement of $107.45/$26.04 fall).
Bulls so far ignored overbought conditions on daily chart, but bearish divergence on daily RSI / MACD, continues to warn.
Rising 10SMA offers solid support at $64.45 and should keep the downside protected, guarding lower pivots at $63.13 (rising 10SMA) and $62.80 (correction low), loss of which would generate stronger bearish signal. 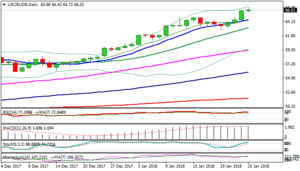 EURUSD spiked above 1.25 on Draghi but without clear break so far