WTI oil hit the highest levels in over six weeks on probe above psychological $65.00 barrier on Wednesday, on fresh bullish acceleration after US crude stocks unexpectedly fell by 2.62 million barrels, compared to forecast for 2.6 million barrels build, EIA report showed.
Oil prices continue to trend higher despite concerns about increasing production of US oil which reached 10.4 million barrels per day, above the output of Saudi Arabia and around levels of oil production in Russia, the biggest oil producer in the world.
Signals of geopolitical tensions in the Middle East and strong falls in crude inventories keep oil prices well supported.
Today’s break above previous high at $64.22, surge through Fibo 76.4% barrier at $64.62 and lift above $65.00, mark an extension of strong Tuesday’s bullish acceleration and continuation of bull-leg from higher base formed at $60.00 zone.
With strong bullish sentiment in play and firmly bullish techs, rally could extend towards next significant barriers at $66.23/28 (01/02 Feb double-top) and key med-term barrier at $66.64 (25 Jan peak), the highest of two-year recovery rally from $26.04 (11 Feb 2016 low).
Consolidative / corrective action could be anticipated in the near-term as slow stochastic is strongly overbought on daily chart, but so far without any stronger bearish signal. 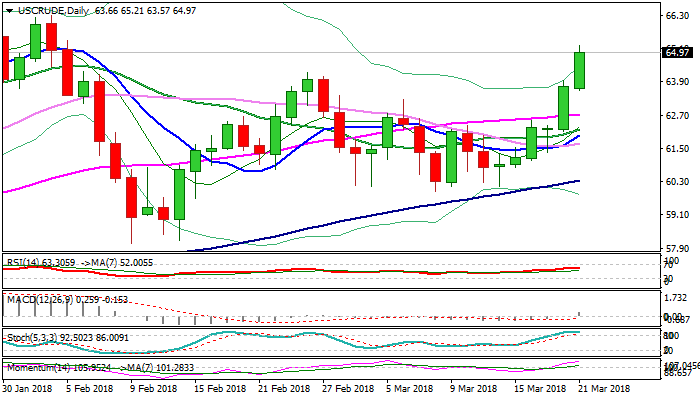 COPPER – bears may consolidate before eventual break below 200SMA; targets at $3.00 zone in focus