WTI oil price rose to new highest level since 17 Mar ($28.53) on Friday, in extension of previous day’s strong rally, driven by renewed optimism on expectations that main oil producers will agree to make significant production cut.
OPEC+ group is working on a deal to make an unprecedented production cut by around 10% of global supply, with meeting of the cartel and its allies being scheduled for Monday, 6 April.
US President Trump said that Russian President Putin and Saudi Crown Price Mohammed bin Salman have agree to reduce production by 10-15 million barrels per day after telephone conversation between three leaders on Thursday.
Positive news have improved the sentiment but fears that 10 million bpd cut would not be enough to counter strong decrease in global demand still weighs.
Another obstacle to the deal could be request of OPEC that the US must join cuts, which was dismissed by President Trump, as the action is forbidden by US legislation, but some US officials suggested that the production is declining due to low oil prices.
The news brought some light into dark oil outlook picture, but a lot of work is to be done to spark stronger recovery of oil prices and neutralize risk of further fall. 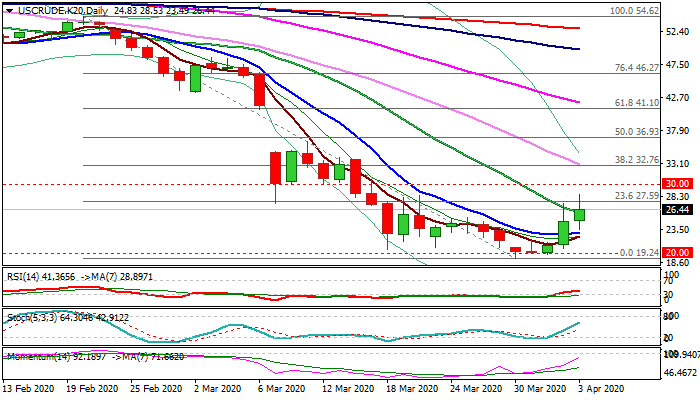 Bulls are pausing under key barriers