WTI oil ticked higher on Thursday, supported by stronger than expected draw in crude stocks (API report on Tuesday showed draw of 5.12 million barrels vs 3.6 million barrels draw forecasted) and threats of attack at oil infrastructure in Nigeria.
The price stayed at the back foot in past two days, following pullback from new three-year high at $64.87, but dips were contained by rising 10SMA at $63.30 zone.
Recovery attempts however, were so far limited and keeping the downside vulnerable.
Extended consolidation could be likely near-term scenario before the price establishes in fresh direction.
Downticks should be held by rising 10 SMA (currently at $63.50) and above past two day lows at $63.30 zone to keep immediate focus at the upside.
Expectations for today’s EIA crude stocks report show draw of 3.4 million barrels, which could be supportive on release at forecasted level or stronger than expected draw in oil inventories.
Conversely, weaker than expected crude stocks could soften near-term structure for break below $63.50/30 pivots and signal deeper pullback. 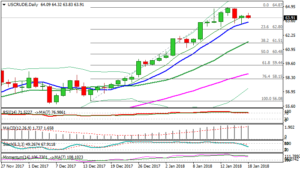