WTI oil eased on Friday from new high at $64.75 (the highest from late 2014) posted previous day) but holding high for now.
Overall picture remains bright on bullish techs and positive sentiment, with the contract being on track for the fourth consecutive bullish weekly close, however oil price is expected to enter corrective phase in the near term.
Doji candle that was left on Wednesday and yesterday’s Gravestone Doji, are seen as initial signs that bulls are running out of steam.
Overbought daily / weekly RSI and slow stochastic already reversed from overbought territory on daily chart, add to growing negative signals.
Today’s close in red is needed to generate further bearish signal, with confirmation seen on return below rising 10SMA ($62.17).
Meanwhile, the price may hold in extended consolidation before establishing in fresh direction.
Only acceleration through Wednesday’s high would sideline growing downside threats. 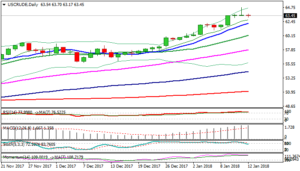