WTI oil price remains under pressure and holding near new seven-month low on Wednesday, following short-lived recovery attempt on Tuesday, which stalled at $90 zone.
The price action holds in red for the fourth straight day, driven by fresh negative sentiment of renewed concerns about global economic growth, as prospects of a global recession warn that demand for oil would weaken.
The most recent data from China showed that industrial production and retail sales unexpectedly slowed, adding to concerns about the recovery of the world’s second largest economy and the biggest oil importer from the slowdown in the second quarter and a narrow escape from contraction is running out of steam.
The negative sentiment was additionally fueled by unexpected and strong fall of the US Empire State Manufacturing Index which fell to the lowest since May 2020.
Positive signal from the US API report on Tuesday which showed a drop in crude inventories was offset by overall negative sentiment and made no significant impact on oil prices.
Technical studies on daily chart show moving averages in full bearish setup and rising negative momentum, while repeated close below broken Fibo support at $88.42 (61.8% of $62.42/$130.48 upleg) boost negative signal.
Also, completion of failure swing pattern on weekly chart add to bearish tone, with weekly close below $88.42 pivot to confirm.
Although bears are in control, oversold stochastic and headwinds from former high at $85.39 (Oct 25 2021) may slow the action for extended consolidation before bears resume towards targets at $80 (psychological) and $78.48 (Fibo 76.4% of $62.42/$130.48).
Broken Fibo support at $88.42 reverted to solid resistance which should ideally cap, with extended upticks to stay under $90.00/$90.36 (psychological / daily Tenkan-sen) to keep bears intact. 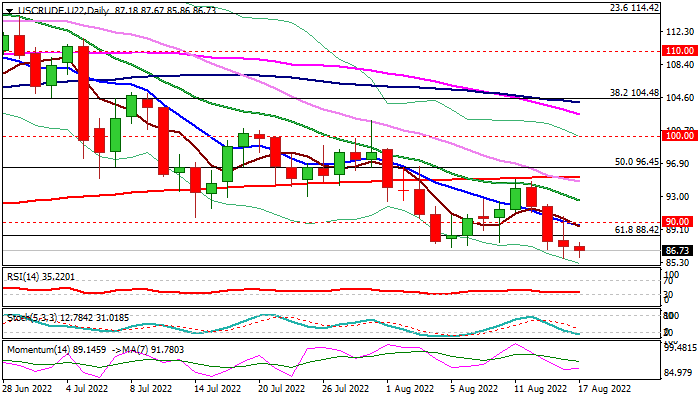 Aussie accelerates through 0.70 support ahead of US data, FOMC minutes