WTI oil remains in red on Friday, pressured by growing fears of recession that continues to sour the sentiment, while comments from OPEC that the cartel is not going to increase more its production and will stick to its planned output increases, although being expected, added to negative tone.
The action on Friday, following 5.3% drop in past two days, is pressuring pivotal support at $104.66 (daily cloud base / Fibo 61.8% of $92.92/$123.65), already cracked last week, with clear break to generate fresh bearish signal.
Oil is on track for the third bearish weekly close  and has registered the first monthly loss in seven months (down 11.5% in June) that adds to reversal signals on larger timeframes (weekly / monthly), though signals would require confirmation on break of a higher base at $92.92/$92.64 (Mar/Apr) to complete a failure swing pattern on a weekly chart.
Daily studies show strong negative momentum and MA’s in bearish setup that keeps focus at the downside, though bears may face headwinds at daily cloud base ($104.62), before resuming towards targets at $101.52 /$100.00 (Jun 22 low / psychological).
Broken 100DMA marks initial resistance ($106.30), followed by daily cloud top ($107.06), with daily Tenkan-sen ($107.76) to cap upticks and keep bears intact. 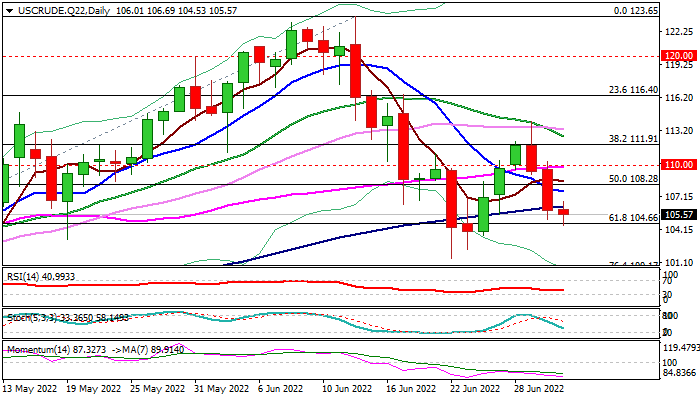