Bears are pausing for the second day but remain in play after hitting new lowest in two decades.
Tuesday’s bullish Doji and oversold conditions on daily chart suggest that the action may hold in a limited consolidation before resuming lower, as technical picture is bearish and heavily weighed by negative fundamentals.
Growing recession fears, fueled by possible energy supply crunch on deteriorating economic and geopolitical outlook, weigh on the single currency which is establishing  below parity level against dollar.
Weaker than expected US PMI and housing data on Tuesday temporarily slowed dollar’s rally, giving the euro opportunity to take a breather, with upticks expected to remain below broken parity level, reverted to solid resistance, to keep bears intact and offer better levels to re-join bearish market.
Push through new low at 0.9900 would risk test of Fibo projections at 0.9853 and 0.9793 (123.6% and 138.2% respectively, of the downleg from 1.0368 top of Aug 10).
Only bounce through 1.0100/1.0134 pivots would put bears on hold for stronger correction. 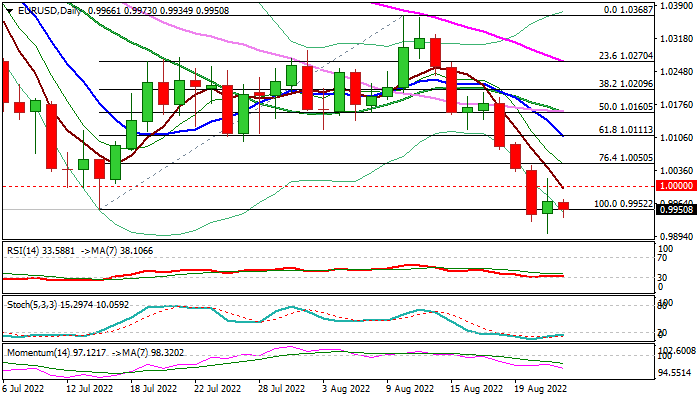 The central bankers will again mainly talk about inflation in Jackson Hole 2022 symposium, but conditions have worsened since last year