The Euro stays on hold on Monday, following a limited impact from downbeat US NFP which was tempered by comments from ECB’s policymaker who said rising energy prices lift inflation, though rise in inflation is still expected to be temporary, but also pointed on other scenario of structurally higher inflation which could prompt faster rate hike.
The pair is consolidating above the base of daily cloud base (1.1538) which contained a five-week drop.
Extended consolidation / limited correction is seen as likely near-term scenario, with upticks to stay under 1.1640 (Oct 4 lower top) and keep bears intact for renewed attack at cloud base and 50% retracement of 1.10635/1.2349 (1.1492), break of which would signal bearish continuation.
Conversely, lift above 1.1640 would delay bears and risk test of pivotal barrier, provided by falling 20DMA (1.1664). 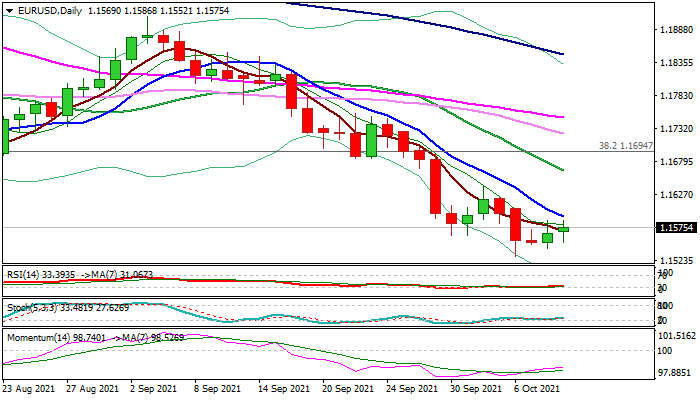 Recovery likely to be limited but formation of weekly hammer warns

Dollar remains at the back foot on Omicron fears, but hawkish Fed partially offsets…