Cable fell to session low (1.2915) as bulls lost traction after probing through 1.30 barrier for the first time since 16 Sep.
Pound was hit by remarks from PM Johnson’s virtual Tory conference on Tuesday.
Johnson said that Britain lost too much from pandemic and they need to fix broken housing market by reducing deposit sizes for home buyers; to raise productivity to ensure economic resilience and not only to return to pre-pandemic performance but to lift the trend rate of growth.
Finance Minister Sunak pointed to the worst economic hits to Britain in three centuries and said that saving jobs must be prioritized over tax rise.
Sunak also warned that a massive $2.6 trillion debt cannot be sustained forever and could trigger a financing crunch in the long term.
Brexit talks remain one of pound’s key drivers, with markets keeping optimistic view that continues to boost sentiment.
European Union wants a trade deal with Britain, but as time is running, they cannot exclude that it will be impossible to reach a deal by the end of the year that would lead into no-deal scenario.
Recent risk mode inflated pound but bulls are expected to face strong headwinds at 1.30 resistance zone, including Fibo 38.2% of 1.3482/1.2675 at 1.2983 / psychological resistance, reinforced by 30DMA.
Daily tech contribute to signals of bulls’ stall as momentum is heading south and about to break into negative territory and stochastic turned sideways at the borderline of overbought zone.
Today’s close will be closely watched as it could indicate formation of bull-trap pattern on bearish close and risk extension towards key support at 1.2866 (daily cloud base / 20DMA), loss of which would signal reversal.
Conversely, firm break above 1.30 zone would neutralize existing downside risk and signal further retracement of 1.3482/1.2675 fall. 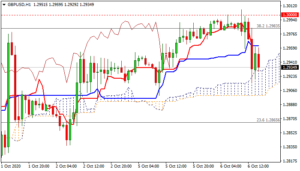 Breaking: UK PM Johnson says not enough to return the economy to pre-pandemic performance but to lift the trend rate of growth