Cable remains constructive on Friday after Thursday’ strong fall was partially reversed, though continues to trade within a narrow-range sideways mode which extends into third consecutive day.
Strong upside rejection above 1.20 barrier on Tuesday, generated initial signal of bull-trap, which hasn’t materialized yet, as two opposite powers that move the pair are still in equilibrium.
Larger uptrend is still intact, suggesting that bull may continue after consolidation, with such scenario being supported bullish daily studies (strong positive momentum and MA’s in bullish setup) along solid demand which was presented by Thursday’s downside rejection and signals of ending the second consecutive week with gains
On the other side, psychological 1.20 barrier continues to provide headwinds and sideways mode is likely to extend until bulls gather strength for renewed attack here.
Sustained break of 1.20 pivot would signal bullish continuation and expose immediate resistance at 1.2048 (50% retracement of 1.3748/1.0348 fall).
Fibo level at 1.1821 and 10DMA (11734) mark pivotal supports, loss of which would weaken the structure. 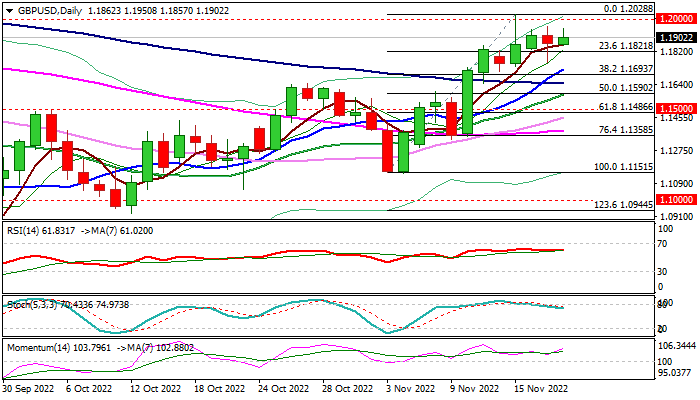