Cable rebounds after 1.2% drop, but on track to end week in Doji candle

Cable rebounds on Friday, inflated by news of resignation of Dominic Cummings, British PM Boris Johnson’s most powerful adviser.
Cummings was the mastermind of 2016 Brexit referendum and Johnson’s 2019 election win, is the second person from the closest circle around Johnson to resign in just two days, as a result of a battle between fractions over the government’s future course, following a series of failures in tackling raging pandemic and the fact that the Britain will formally leave the EU on Dec 31.
The EU and UK will resume their trade talks on Monday, after failing to close gaps between their positions on two key issues: competition rules and fishing.
Both sides stubbornly hold their positions and not willing to compromise in negotiations on a deal that would protect nearly a trillion dollars-worth trade from possible disruption.
Fresh recovery emerges after the fall of past two days was contained by rising 10DMA and reducing immediate downside risk, but requires lift above 1.3200 barriers for confirmation.
Larger bull-leg from 1.2675 (23 Sep low) remains intact, with latest pullback seen as correction ahead of fresh attack at 1.3300 resistance.
Daily studies maintain strong bullish momentum, with moving averages in bullish setup, underpinning the action, but weekly action is set to end in Doji candle, warning of indecision.
Dip-buying scenario remains favored while the action holds above rising 20DMA (1.3062), and extended dips find ground above psychological 1.30 support. 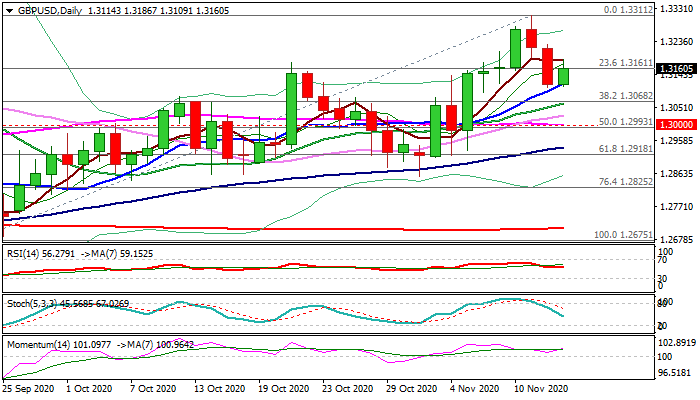