The dollar kept firm tone against the basket of major currencies on Friday, following previous day’s rebound that almost fully reversed Wednesday’s post-Fed fall.
Investors digested Fed’s dovish stance on decision to keep ultra-low rates but central bank’s pledge to press on with aggressive stimulus and projections for the strongest economic growth in nearly a four decades, improved the sentiment and lifted the greenback.
Fresh strengths pressure the upper boundary of two-week congestion after dips were contained in the zone of strong Fibo support (38.2% of 89.66/92.51 upleg) and formed a higher base at 91.30 zone, with subsequent bounce from this base signaling that the pullback from 92.51 (March 9 high) might be over.
Fresh bulls need close above 92 barrier (congestion top / Fibo 61.8% of 92.51/91.27 pullback) to confirm reversal.
The notion is supported by bullish daily studies and expectations for bullish weekly close and over a quarter percent gain over the week.
Today’s close (the second consecutive) above 10DMA (91.79) would confirm bullish near-term stance. 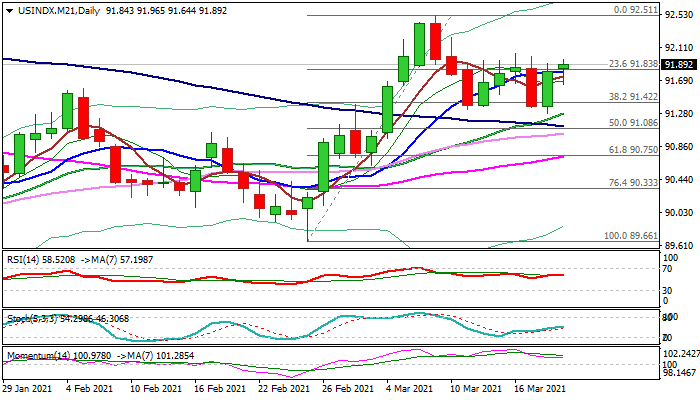