The dollar hit new 20-year high against the basket of major currencies in early Monday, driven by fresh demand on US interest rate outlook.
The dollar index opened with gap higher on Monday and rose to the highest since June 2002, after Fed Chair Jerome Powell, in his speech in Jackson Hole symposium on Friday, further boosted dollar’s positive sentiment by signals that US interest rates would stay higher as long as required to bring soaring inflation down.
Lift above former tops at 109.19/12 (also Fibo 76.4% of 2001/2008 downtrend) opens way for test of psychological 110 barrier, which guards 112.04 (June 2002 high), though the rally could accelerate towards 2001 peak if geopolitical and economic conditions deteriorate in coming months
Technical studies are bullish on all larger timeframes and contribute to positive outlook, with Friday’s long-tailed hammer candle signaling that the downside remains well protected, as last week’s pullback was very shallow and short-lived.
The index is on track for strong monthly advance (over 3%) which also marks the third consecutive month of rally and the biggest monthly gain since April that adds to positive signals. 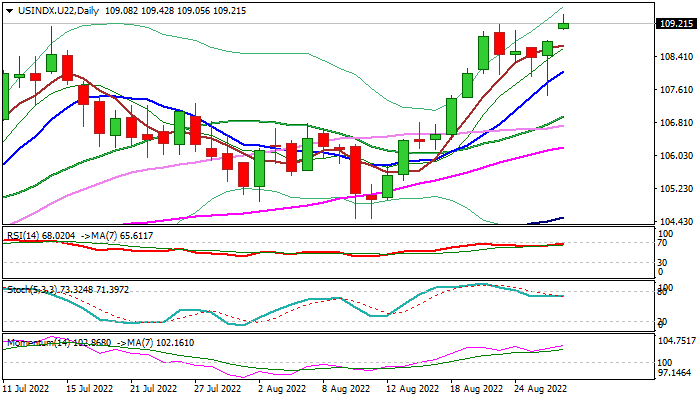