The Euro turned to red in European trading on Tuesday, following a four-day recovery after a sharp post-US inflation report’s drop.
Bounce rose above parity level, but failed to register a clear break higher.
Underlying bears received fresh support today from downbeat EU data, which showed the record current account deficit of 19.9 billion euros in July after a surplus of 4.2 billion Euros in June and compared to the same period last year, when the surplus was 28.9 billion Euros.
Deep trade gap was mainly driven by surging costs of imports of oil and gas, as well as raw materials, adding to negative outlook for the bloc’s economy.
Overall picture remains bearish and prolonged consolidation as likely scenario, before bears regain full control.
Conflicting signals from fresh bearish momentum and bullish setup of daily Tenkan-sen / Kijun-sen are likely to keep near-term action in directionless mode until Fed’s announcement late Wednesday, which would spark stronger volatility.
The US central bank is widely expected to raise rates by another 75 basis points in September that should provide fresh support to the dollar, but some economists do not rule out more aggressive stance and 1% hike, that would accelerate dollar’s larger rally and push the single currency significantly lower. 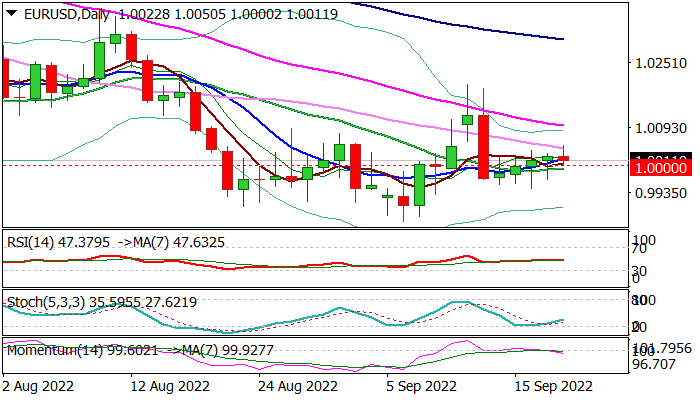