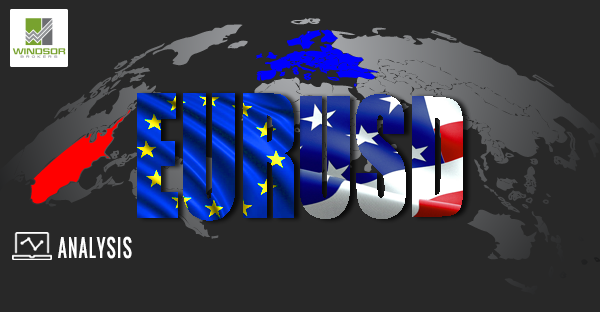 The Euro opened with gap-higher on Monday against the dollar which came under increased pressure on US government shutdown, but eased during Asian session as greenback started to regain traction.
The pair peaked at 1.2271 after opening and subsequent dip found footstep at 1.2214 (Friday’s low).
Some recovery attempts were seen in early European trading, but gains were unable to clearly break barrier at 1.2235 (cluster of hourly MA’s).
Studies on lower timeframes are in neutral setup and show no clear direction in the near-term.
Larger picture (daily) shows the pair in extended consolidation range after failure to clearly break 1.2300 barrier, but overall uptrend stays intact.
The EURUSD pair was up over 2% in the first three weeks of 2018, extending broader uptrend from Jan 2017.
Recent gains were boosted by rising expectations that the European Central Bank will end its QE program, as signaled by hawkish ECB minutes two weeks ago.
Focus turns towards ECB policy meeting on Thursday, with continuing hawkish tone from the central bank to further inflate the Euro.
Daily techs are firmly bullish and continue to underpin, with current consolidation being triggered by overbought conditions.
Bullish structure is expected to stay intact while the price holds above pivotal support at 1.2165 (consolidation range low, reinforced by rising 10SMA).
Only break here would signal deeper correction, however, extended dips would offer fresh buying opportunities as buying dips on strong uptrend remains favored scenario.
The pair may stay within the range until ECB meeting, with EU / German ZEW data on Tuesday and PMI data release on Wednesday also being in focus. 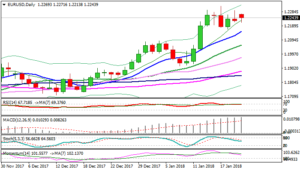