Cable jumped to one week high at 1.3064 on Wednesday, after European Union’s Brexit negotiator expressed optimism, saying that trade deal with Britain is ‘within reach’.
Barnier said that both sides are constructive and willing to compromise in attempts to make progress in stalled talks, hoping that they will be able to overcome the obstacles and find solutions to the most difficult areas.
The Brexit talks story was pound’s main driver with conflicting news in past few days, keeping the pound congested and without clear direction.
Also, fresh optimism about possible agreement in US stimulus talks, boosts risk sentiment and deflates dollar.
Fresh advance signals trend breakout as rally surged above bear-trendline (connecting tops at 1.3482 and 1.3082) which so far capped several upside attempts.
Today’s lift above trendline resistance (1.2987), psychological 1.30 barrier and 55DMA (1.3016) was initial bullish signal which requires confirmation on daily close above these levels, but extension and close above next key resistances at 1.3081/87 (top of thinning daily cloud / upper 20-d Bollinger band) would provide more evidence of trend reversal.
Rising momentum studies on daily chart support the action along with daily moving averages which returned to bullish setup.
Near-term action is expected to remain biased higher while holding above 1.30 support, with corrective dips to provide better opportunities to re-enter bullish near-term market.
Caution on return and daily close below 1.30 level that would signal false break higher and renew downside risk. 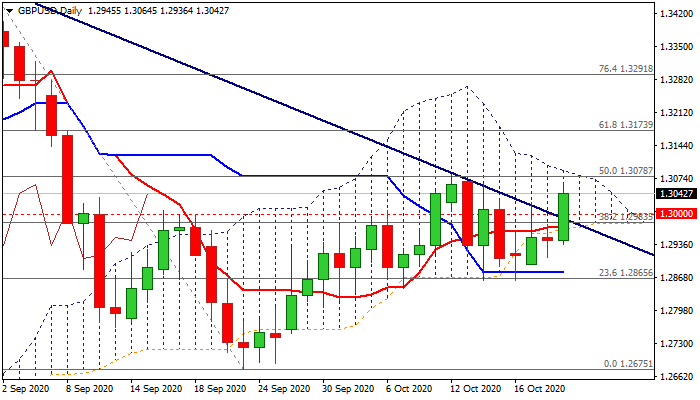