News from Russia and aggressive Fed may push Euro much lower

The Euro extends fresh bearish acceleration into second straight day, after disappointing EU data on Tuesday soured the mood, with announcement from Russian President Putin about the partial mobilization, further worsening the sentiment.
The latest action also added to concerns about the economic outlook for the bloc, as significantly reduced gas supplies to the EU from Russia, might be stopped completely if the situation deteriorates that would lead to a catastrophic scenario for the European economies.
Germany, as the largest EU economy is the most exposed and top officials already warned that industry will be hit badly and some parts likely to be shut down due to the cut of gas supplies.
The news from Russia come just hours before the key event – US Federal Reserve rate decision , with wide expectations that the central bank will raise interest rate by 75 basis points for a third straight time, in their continuous efforts to bring soaring inflation under control.
With the size of rate hike being known (although some economists do not rule out even more aggressive action in raising rate by 1%) markets turn focus towards signals of Fed’s steps in the near future, looking for more clues about the pace and the length of policy tightening process.
With the latest inflation data showing that consumer prices rose above expectations in August, the US policymakers are likely to keep an aggressive stance for some time that will keep the dollar inflated, along with safe-haven flows and weigh on Euro.

Today’s fresh weakness signaled an end of limited correction in past five days and also generated negative signal on break of pivotal Fibo support at 0.9942 (76.4% of 0.9864/1.0197 upleg), with close below this level to confirm bearish stance for retest of 20-year low at 0.9864 (Sep 6), violation of which would open way for a deeper fall. 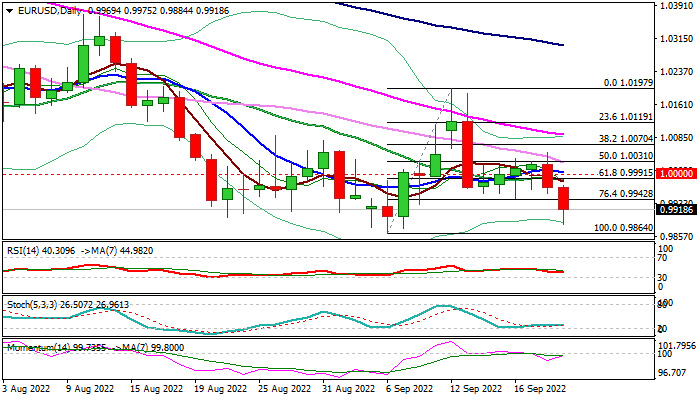