WTI oil fell sharply on Wednesday, losing around 5.6% in Asian and early European session, following push by US President Biden to bring down soaring fuel prices, which cause a huge problem to Americans as the summer driving season started.
The measures include pressure on America’s major energy companies to drive down fuel prices as they made huge profits and a call for temporary suspension of a federal tax on gasoline.
Representatives of oil companies are set to meet President Biden tomorrow, as many already complained about measures, but the immediate response from the White House left no space for oil producers to escape from the plan.
Daily chart shows a number of large bearish candles, signaling the near-term price action is in steep downtrend, which extends into the second straight week, after last week’s 12% drop that completed a reversal pattern on weekly chart.
Weak daily studies complement negative fundamentals, as bearish momentum continues to strengthen and the latest fall broke through important technical supports at: $106.55 (trendline support), $105.07 (100DMA) and $104.66 (Fibo 61.8% of $92.92/$123.65) with close below these levels to boost negative signals.
Bears could stretch towards $100 zone (Fibo 76.4% / psychological) on persisting negative sentiment, with corrective upticks on oversold conditions and profit-taking, to offer better levels to re-join bearish market.
Broken bull-trendline offers solid resistance at $106.55) which should ideally cap and guard upper pivots at $108.28 /$110.00 (broken Fibo 50% / psychological). 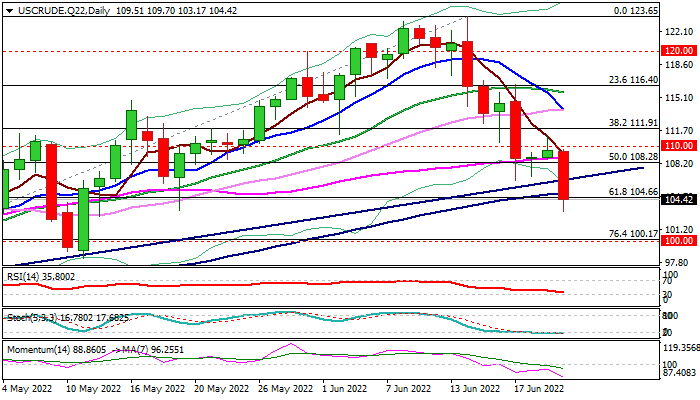 UK inflation rises to new highest in four decades in May