WTI oil holds in red for the fourth straight day and moved lower on Friday after bouncing from new two-week low at $60.17 on Thursday.
Recovery attempts proved to be short-lived as oil price remains under pressure on continuing concerns about US oil production, strong build of US crude stocks and fresh fears about US protectionist policies which could result in trade war after President Trump announced impose of tariffs on imported metals.
Daily techs show MA’s (10/20/30/55) in bearish setup, with momentum studies turning south, which supports for further easing.
Fresh weakness probes again through daily cloud base (60.72) for renewed attempts below cracked pivotal support at $60.49 (Fibo 61.8% of $58.19/$64.22 bull-leg), close below which will be strong bearish signal.
In addition, WTI contract is on track for bearish weekly close and forming weekly bearish engulfing, which would add on existing negative outlook.
Firm break below daily cloud / Fibo support would look for retest of Thursday’s low at $60.17 and attack at psychological $60.00 support.
Falling 20SMA ($61.61) is expected to cap upticks and keep bears intact. 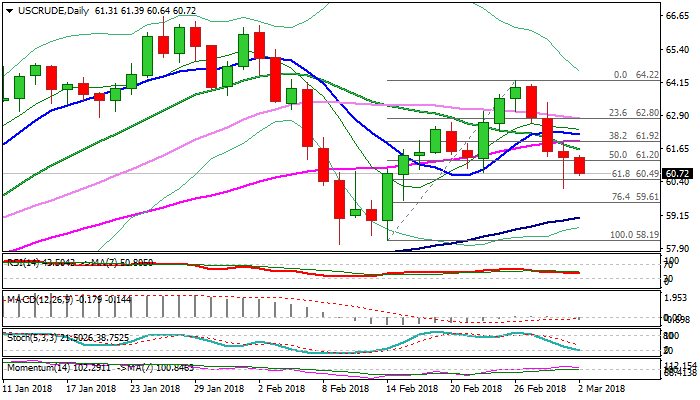