Oil price recovered slightly on Wednesday, following previous day’s fall and holding for now above initial support at $57.34 (daily Tenkan-sen).
Tuesday’s quick pullback which dipped to $56.85, retraced 61.8% of three-day $55.81/$58.54 recovery and undermined near-term bulls.
On the other side, bullish structure remains intact on daily chart and keeps in play fresh attempts higher while the price holds above Tenkan-sen line.
Conversely, sustained break lower would weaken near-term structure further and risk retest of Tuesday’s low at $56.84 (reinforced by daily Kijun-sen) loss of which would signal an end of recovery phase from $55.81.
API report released on Tuesday showed stronger than expected fall in crude inventories but build of gasoline and distillate stocks, with EIA report due to be released later today, being in focus.
Forecast show 3.75 million barrels draw in oil inventories, compared to previous week’s draw of 5.61 million barrels, which could put oil prices under pressure on lower than expected release. 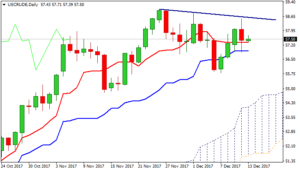