WTI oil is holding within tight range on Thursday and awaiting the outcome of today’s OPEC meeting, which is the key event for oil this week.
Oil price was in red for three days on corrective pullback from fresh high at $59.02, which found footstep at $56.75, contained by rising 20SMA.
Stronger than expected draw in oil inventories, showed by EIA report on Wednesday (-3.42 million barrels vs 2.3 million barrels f/c), did little to boost oil prices as uncertainty over the OPEC’s decision dampened sentiment and offset positive impact
Oil ministers from major oil producers are meeting today to decide whether to extend their current output cut agreement. Wide expectations in the markets are for extension of agreement for another nine months, until the end of 2018.
Failure to reach agreement would put oil under fresh pressure and risk deeper pullback from $59.02, while the outcome which will match expectations would likely boost oil price. 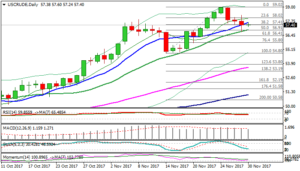