Cable regained traction on Monday and rose again above psychological 1.20 barrier which resisted several attacks last week.
Fresh bulls are supported by rising momentum as 14-d momentum indicator emerged into positive territory and last week’s bullish close, the first in four weeks.
However, bulls need an initial signal on eventual close above 1.20 level, with stronger reversal signal requiring extension and close above pivotal Fibo resistance at 1.2106 (38.2% of 1.2666/1.1760) that would open way for stronger recovery.
Conversely, failure at 1.20 or stall under 1.2106 would add to negative signal and keep the downside at risk.
All eyes at the key events this week (US consumer confidence, Fed policy meeting, US Q2 GDP) with Fed taking the centre stage.
The US central bank is widely expected to raise interest rate for another 0.75%, but investors will be focusing on Fed’s view on inflation, with two scenarios – inflation is peaking or it may rise further.
This would add to Fed’s  outlook on the economy, but will also indicate the central bank’s next steps, particularly about the expected action in September’s policy meeting.
Bank of England’s policy meeting next week is also in focus, along with political turmoil after resignation of PM Johnson and two possible successors.
The BoE is likely going to raise its interest rate by 0.5% next week, with most of economists expecting another 0.5% hike in September, that will add to pound’s volatility. 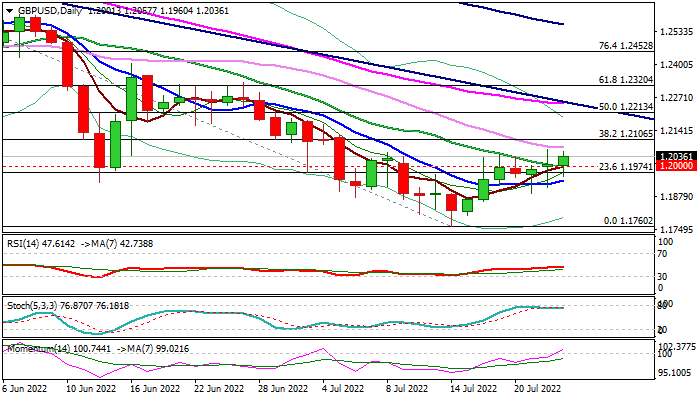