WTI oil price soared nearly $5 and hit the highest in almost two weeks ($20.27) in a minutes after news that Russia and Saudi Arabia reached deal circulated.
US President Trump announced that he spoke to Russian President Putin and to Saudi Crown Prince and said he believes that two world top oil exporter countries can reach a deal in few days and reduce the output by more than 10 million barrels per day.
The action came at the right time as oil price was hitting critical $20 support, break of which would risk fall towards $10 per barrel.
The news restored confidence among traders, which massively bought oil contracts, squeezing larger shorts.
Fresh advance cracked pivotal falling 20DMA barrier ($26.79), with minimum requirement to sustain fresh gains seen on daily close above broken 10DMA ($22.74), while close above 20DMA would provide more significant bullish signal for recovery extension towards psychological $30 barrier.
The action of two key OPEC+ members will give more details about oil price’s direction in the near term.
If they reach deal and reduce production that would sideline disastrous scenario of world being flooded by cheap oil and demand slashed by coronavirus pandemic that would further inflate oil prices.
Otherwise, the outlook will remain negative. 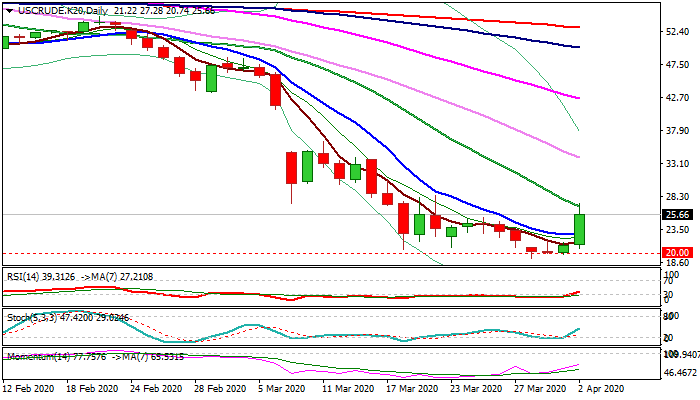 Breaking: WTI oil surged above $27 on news of Saudi-Russia deal