The USDJPY accelerates lower in European trading on Friday, (down 1.4% for the session), as Japanese officials ramped up warnings about possible intervention to stop yen’s strong fall, as the currency hit the lowest in 24 years against the dollar and eyes 1998 peak at 147.68.
The widening gap between the Bank of Japan and US Federal reserve policies  was the main reason of yen’s fall, as the US central bank maintains very hawkish stance and remains on track for further rate hikes, while the BoJ sticks to its ultra-loose monetary policy.
Fresh weakness leads the pair towards the first bearish daily close after ten straight days of gains, with growing signs of correction from lose of bearish momentum on daily chart and stochastic and RSI indicators heading south after reversing from overbought territory.
Bears eye pivotal support at 141.54 (daily Tenkan-sen / Fibo 23.6% of 130.39/144.99 rally), break of which is needed to confirm initial bearish signal and open way for deeper correction and expose psychological 140 support.
Otherwise, pullback’s stall at this zone would signal that larger bulls remain fully in play and just taking a breather before resuming. 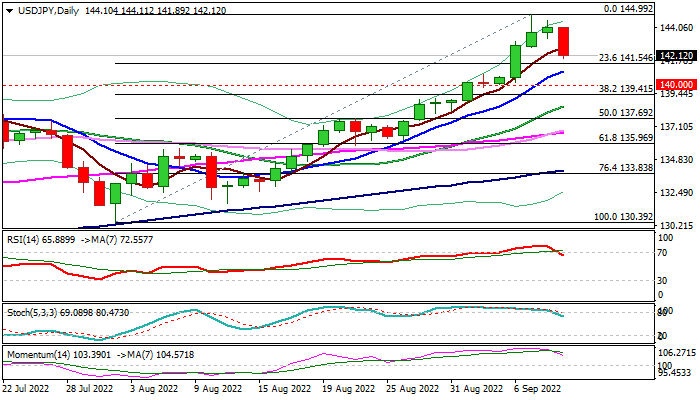 Cable bounces to the highest in Sep on profit taking, weaker dollar