WTI oil opened with gap lower and fell over 2% during Asian / early European session on Monday, hit by fresh wave of risk aversion.
Oil extends last week’s losses which resulted in weekly close below psychological $40 level and formation of bearish engulfing pattern on weekly chart.
Sharp rise in a number of new Covid-19 infections in the US and Europe underlines severity of the outbreak and sours the sentiment as concerns over demand grow.
The outlook was further hurt by Libya resuming exports and disappointments after OPEC+ latest meeting ended without new policy proposals as the cartel is set to increase production by 2 million bpd in January 2021 after cutting output by a record amount earlier this year.
Daily studies are weakening as momentum broke into negative territory, RSI and stochastic head south, moving averages turned to bearish setup and Monday’s action broke below thin daily cloud.
Fresh weakness cracked pivotal Fibo support at $38.62 (61.8% of $36.61/$41.86), close below which would add to negative signals and open way for test of 200DMA ($37.62) and  lows of 1 ½ month long range at $36.61/11 in extension.
Only return and close above $40 barrier would neutralize bears. 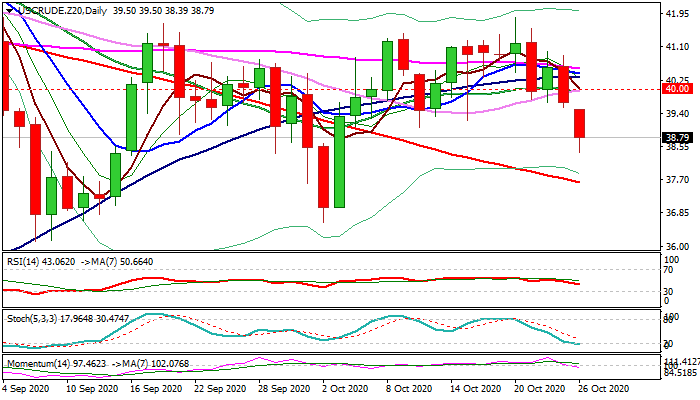