Pound may fall further if conditions continue to weaken

Cable returned to red after limited bounce on Tuesday, sparked by downbeat US data, signaling that short consolidation is likely to precede fresh push lower.
Initial negative signal on break below 2022 low (1.1760) that hit new lowest since March 2020 (1.1717), needs confirmation on repeated close below 1.1760 pivot and open way for continuation of a bear-phase from 1.2293/76 double-top.
Sterling remains heavily pressured by surging inflation which already hit a double-digit value and forecast show it may rise to 18% next year, built on the base of a massive amounts of money pumped in the economy to keep it afloat during coronavirus pandemic.
Soaring inflation undermined a pillars of the households – housing market and a cost of living that is likely to drive the pound lower, as economic activity is slowing sharply and bringing the economy into conditions last seen during 2008 recession.
Below 1.1760, bears see no significant obstacles en-route towards pandemic low at 1.1410, with increased risk of stronger bearish acceleration if current situation deteriorates that can not be ruled out.
The upside so far remains well protected and only sustained break above 1.20 zone (psychological / base of thick daily cloud) would be a game changer. 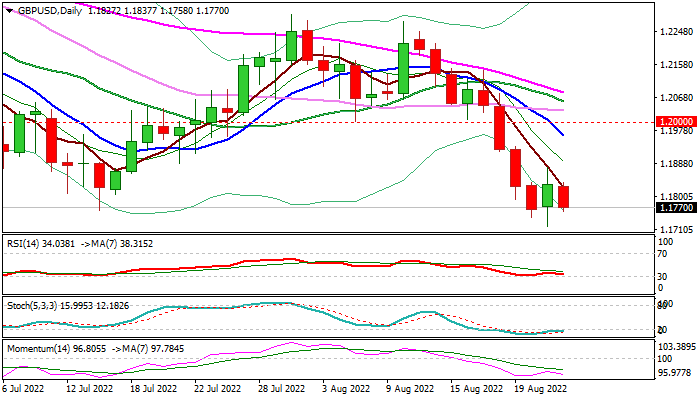