Cable rose one full figure on Monday, lifted by fresh risk sentiment on hopes for coronavirus vaccine.
Today’s rebound is on track to complete reversal pattern on daily chart, but such action was not justified by technical studies.
Rising negative momentum on daily chart and flat stochastic in deep oversold zone, signal that fresh recovery attempts lack strength.
Growing fears that Brexit  process will end without trade deal between the UK and EU, weighs on sterling, as PM Johnson’s latest plan to break current agreement between two sides, which is in collision with international law and faces vote in the parliament, adds to negative factors for sterling.
Cable bounced  after two-week fall faced headwinds from strong 1.2730/00 support zone (consisting of 200DMA, Fibo 61.8% of 1.2251/1.3482, daily cloud base and 100DMA) but subsequent bounce needs to be confirmed.
Break and close above the top of rising daily cloud (1.2934) is the minimum requirement, with extension above psychological 1.30 barrier and 1.3037 (Fibo 38.2% of 1.3482/1.2762), needed to generate stronger reversal signal.
Otherwise, the downside is expected to remain vulnerable of deeper correction, which would be sparked by firm break of pivotal supports at 1.2730/00 zone.
Markets focus UK jobs data on Tuesday, which, according to forecasts, could further harm sterling. 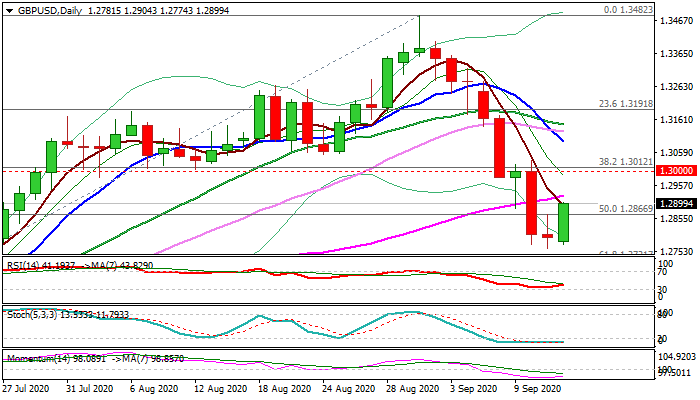 Bears are taking a breather after last week’s 1.8% drop